Member
#1
A well respected friend of mine said that his father believed in God because all other liquids get more dense with decreasing temperature ?

This unique characteristic allows lakes (and the sea?) to remain largely liquid when it gets cold, thus allowing sea creatures and plants to survive.

Any thoughts, or is this yet another coincidence ?

New
#2
By itself it is interesting and when you consider all the other facets of the universe that are also fine tuned for life, the argument becomes very convincing.

The Coherence Of An Engineered World

Normally, information from scientific discoveries is funnelled into the development of engineered products that benefit humanity. But recently a strange turnabout in the flow of practical information has occurred. Concepts from the field of engineering have been found extremely useful in areas of science. From the very large aspects of the universe (i.e. big bang cosmology and galactic and stellar evolution) to the very small aspects (i.e. the fitness of the chemical elements and the coding of DNA for life), the cosmos is so readily and profitably reverse-engineered by scientists and engineers as to make a compelling argument that it was engineered in the first place. The linking of extraordinarily complex, but stable functional structures with the production of value provides the strong impression of a calculating intentionality, which is able to operate in a transcendent fashion. The most coherent view of the universe is that of a system of subsystems that efficiently interact to prepare for, develop, and support advanced life, subject to various physical constraints. The quest for understanding our universe as a whole benefits from the integration of knowledge from all areas of study, including those that consider questions of purpose, such as design engineering. The synthesis of this knowledge that provides the most satisfying answers regarding human experience is one that admits the recognition of purpose and the existence of an (as yet, not-wellunderstood) engineering influence
Click to expand...
(the paper is free to download but you have to register)

More on fine tuning here:
The Fine-Tuning of the Universe to one part in 10^10^123 is best explained by an intelligent designer and creator, aka. God.
http://ncu9nc.blogspot.com/2014/08/the-fine-tuning-of-universe-to-one-part.html

Gravitational force constant: 1:10^40 (ref. 1)
If larger: stars would be too hot, they would burn up too quickly, and too unevenly
If smaller: stars would remain too cool so that nuclear fusion would never ignite and hence we would have no element production

Initial Entropy of the Universe: 1:10^10^123 (one in ten to the tenth to the 123rd) (ref. 3)
If larger: stars would not form within proto-galaxies
If smaller: no proto-galaxies would form

Initial entropy before inflation: Greater than 1:10^10^123 (ref. 5)
If larger: stars would not form within proto-galaxies
If smaller: no proto-galaxies would form

Cosmological constant: 1:10^120
If larger: universe would expand too quickly to form solar-type stars

Ratio of number of electrons to number of protons: 1:10^37
If larger or smaller, electromagnetism would dominate gravity, preventing galaxy, star, and planet formation

The rare confluence of conditions that allow Earth to support complex life also make the Earth the best location from which to make scientific discoveries. Those scientific discoveries reveal that the universe is understandable to humankind. All this indicates a purpose to the universe: to support intelligent life and to allow intelligent life to discover that the universe was created.
http://ncu9nc.blogspot.com/2014/08/the-privileged-planet-rare-confluence.html

Member
#3
Jim_Smith said:
By itself it is interesting and when you consider all the other facets of the universe that are also fine tuned for life, the argument becomes very convincing.
Click to expand...
Indeed. In a recent series of BBC tv broacasts, physicist Brian Cox made a very solid case around the incredible improbability of the various factors which make our planet, our existence possible. He built up his case, led us all the way towards the certain conclusion, then right at the last moment veered off at a tangent and declared that the multiverse means that none of the previous facts were significant at all, there was nothing to see here, move along. For someone who claims to find the universe exciting, he sure had a great way of making it seem mundane.
S

Member
#4
Steve said:
Any thoughts, or is this yet another coincidence ?
Click to expand...
It's not a big deal. Citing these things in the whole "designed for life" argument seems to ignore the obvious fact that it's a classic "chicken or the egg" consideration. It is just as (in fact more) likely that forms of life emerge (from a materialist macro-evolution viewpoint) or are generated (from other viewpoints) to fit what's there as it is that what's there is developed to suit specific forms of life.

Member
#5
Steve said:
A well respected friend of mine said that his father believed in God because all other liquids get more dense with decreasing temperature ?

This unique characteristic allows lakes (and the sea?) to remain largely liquid when it gets cold, thus allowing sea creatures and plants to survive.

Any thoughts, or is this yet another coincidence ?
Click to expand...
Water is an amazing molecule. It is called the universal solvent. The most versatile solvent there is. And even though it is simple scientist are still probing it's qualities.

Yes it becomes less dense as a solid as the molecules begin to from hexgonal structures with voids. So rivers and lakes that freeze become insulated. It has a high boiling point due to hydrogen bonding, otherwise it would exist as gas normally, it is one of the few substances that exists in all three states on Earth. Absorbs and regulates heat and our environment. The molecular geometry is a bent V, so each molecule is like a little magnet which is why it can disolve most ionic compounds and It can act as both an acid and a base.

Interestingly hydrogen bonding conforms to the golden ratio. And it is the nature of hydrogen bonding and it's molecular geometry that gives water all its remarkable properties.
Last edited: Dec 13, 2014 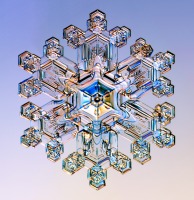 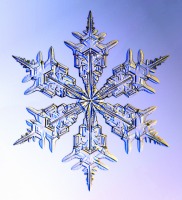 Awesome isn't it? Never the same. Typically a extrapolation of the hexagonal geometry, as the six arms crystallizes with the varying enviromental influences and a hidden geometry is revealed.

There always seem to be exceptions to rules though, these ones are very curious. It suggests some polarity in the formation. 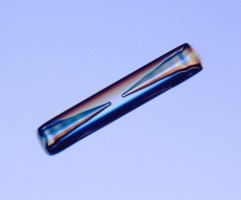 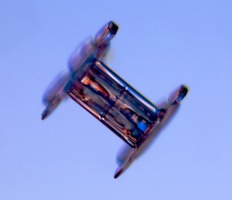 Member
#7
It has only been since around 2005 I think that we discovered the role of the golden ratio in atomic physics, it dominates what is known as the Bohr radius, the radius of atoms and ions. Specifically to the bond lengths between atoms and ions. (Yu, D, et al, 2006).

A Figure from his work illustrating the ratio in hydrogen bonding. 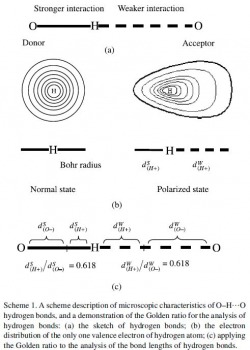 Furthermore the extensive research of Raji Heyrovska has shown that the Bohr radius can be divided into golden sections pertaining to proton and electron also anionic and cationic ratio of any atom. Many molecules behave additively, these ratios add up, their behavior is the sum of covalent and atomic radii.
Apparently true whether covalent (sharing electrons) or ionic (dipole attraction).