Mod+ My New Book! Psi Wars: TED, Wikipedia and the Battle for the Internet

Associate
#1
I’m not just a blogger anymore. I’m officially an author. My book is available on Amazon on both Kindle and in print. 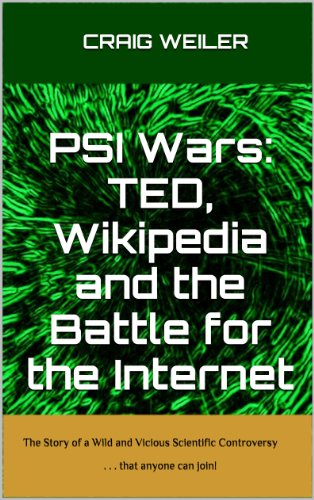 In journalistic fashion, Craig Weiler relates what began as a seemingly harmless attempt to make sure that TED talk videos maintained a high standard and how this exploded into a wild scientific controversy. When the nonprofit company took down one of their YouTube videos by scientist Rupert Sheldrake, who had given a speech on the philosophy of science, they ignited a fierce discussion that eventually grew to include hundreds of people spanning the globe. For a while, ordinary folks, distinguished scientists, Internet trolls and even a Nobel Prize winning physicist all got together to hash out the greatest scientific controversy . . . ever.
Click to expand...
Here is a sample of the reviews so far for this book:

This is a well written journalistic exposé of an Orwellian double-speak world that — unfortunately — is not a work of fiction.

It describes a world where the most widely accessed factual encyclopedia is actually a work of fantasy written by anonymous amateurs; where organizations that purport to support scientific inquiry in fact do the complete opposite; where a celebrated science prize is actually an impossible-to-win publicity stunt; and where an entertainment outlet with a mission for sharing ideas instead acts to censor them. And this is just the beginning.

As one of the speakers originally invited to participate in the WestHollywoodTEDx event that was declared unworthy by TEDx’s mysterious scientific advisory board, I have closely followed Craig Weiler’s incisive writings on this subject. Craig gets it right from start to finish — well, not “finish,” because the controversy still rages. He understands the sociocultural and academic issues clearly and has the guts to say so in this excellent book. …

An excellent book. Clearly written, lively in style, informative and accurate. As one of the people at the centre of the controversies Craig Weiler describes, I know more than most people do about the events he writes about, and his is by far the best account of these recent battles for the internet. His title is not an exaggeration. . .

A. Skeptic
Click to expand...
Here’s the link for the print version. Createspace is part of Amazon and for some reason my royalties are a lot better if you buy it there. It will be available elsewhere in a few days.

​
Click to expand...
Kudos and congrats. I also gotta give you props for favorable reviews by some people whose work I respect.

New
#3
Off to buy it and your shameless self-promotion is fully supported. lol

Associate
#4
Tyler Snotgern said:
Off to buy it and your shameless self-promotion is fully supported. lol
Click to expand...
That's supposed to be a very happy face. But the way it's drawn it looks like that fake smile people have on their face when they're visiting family for Christmas. Anyway, thank you!

Member
#5
Like I told Craig, I ordered it and am gonna read it when it arrives on my doorstep - early January I think it said. Can't wait for it! I hope a lot of people here support him! Congrats again, Craig.

Associate
#6
Ian Gordon said:
Like I told Craig, I ordered it and am gonna read it when it arrives on my doorstep - early January I think it said. Can't wait for it! I hope a lot of people here support him! Congrats again, Craig.
Click to expand...
Thank you!

Associate
#9
Thank you Bucky and Ethan!

Member
#11
Wonderful! I am going to order the printed copy.
It is about time those damn pseudo's get a stiff thrashing!

Member
#12
Craig Weiler said:
My book just got reviewed by Robert McLuhan, who wrote Randi's Prize.
http://monkeywah.typepad.com/paranormalia/2013/12/the-battle-for-the-internet.html
Click to expand...
This is making me look forward to reading it, Craig!

Associate
#13
It's been getting a very positive reception overall. You don't really know how people are going to react to your work until you put it out there. So I'm quite happy about this turn of events.

Member
#14
I've almost finished it and would recommend it.